“Arte segnica, il gruppo del Cenobio, Milano 1962/63”
“Sign art, the group of Cenobio, Milano 1962/63”
The Group of Cenobio 1962-1963
Angelo Verga, Ettore Sordini, Vermi, La Pietra and Ferrari, are well aware of what Spengler declared before the last war, that: “Western European man will no longer have to wait for a great painting and a great music.

His architectonic possibilities were already exhausted 100 years ago. The possibilities remaining to him are solely those of extending the domain. But I see no disadvantage in that, if a capable generation full of boundless hope quickly discovers that some of these hopes are futile. Even if these are their dearest [hopes]; anyone of worth will know how to abandon them and impose themselves. Of course, the outcome may be tragic for some of them, when, in the decisive years, they realise that it is no longer possible for them to conquer any part of the domain of architecture, drama and painting”.
For some months now we are seeing the tragic outcome of this oversight, with late, limited and transitory phenomena that are swallowing up almost all the art works produced between 1955 and the present day.
If we call the perception of the cosmic rhythm the possibility of vision comprised within the above-mentioned terms and reduce the visual space to a sensorial capacity, we will find that the only outcome is a “symbolic experimental minimum”.
This is why I have convinced myself that the new space found by the current dynamic has dissolved the constant of all the physical dimensions with which time is shaped and that the great style of representation is buried or, at least, has become contradictory, enough to enable, if conceded, only the opening of the hypotheses, the fabrication of the hypotheses, the enumeration of the hypotheses. Taking painting as an example, one cannot question the choice between a nostalgic image, albeit of high experimental mastery, where the representation of the owl, the earthquake or excrement can be seen as an attempt to search for the truth of the owl, the earthquake or the excrement – but what does this matter to the new cosmic rhythm? – and the construction of a visual hypothesis, where the transformation of the atmosphere in the space of a painting can underscore the language of the representative reality of that moment and, therefore, the possible direction of the future. And this is why I believe that the association of the five Cenobio painters and their visual proposal are closer to that hypothetical possibility and that they can be set apart from the current methodical misunderstanding.
Presentation of the exhibition “Il cenobio all’Indice”, Galleria Indice, Milan, 1962 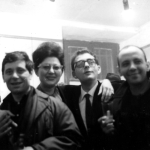 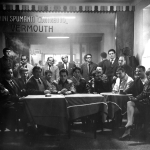